Is the FTSE100 heading for a massive fall? 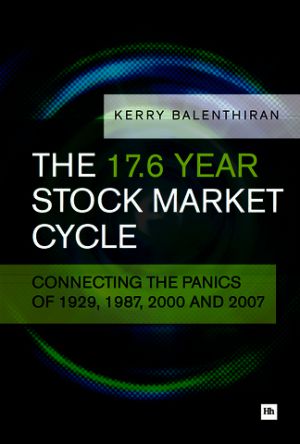 Before we consider whether a substantial drop in the FTSE100 index is a possibility, I first want to introduce you to the workings of the so-called ?Balenthiran Cycle?.

Once in a while I come across an investment book that I find both instructional as well as inspirational in particular when its about stock market cycles.

This book claims that the stock bull market will end before the Autumn 2013 while the bear market will reassert itself later in 2013 and continue until 2018. That kind of prediction got my immediate attention.

Before we delve a bit deeper into these predictions, lets first define what cycles are.

Cycles are a sequence of events that repeat over time. The outcome won?t necessarily be the same each time, but the underlying characteristics are the same. A good example is the seasonal cycle. Each year we have four seasons, but the weather can, and does, vary a great deal from one year to another. And so it is with the stock market.

Cycles research is not something new. It is probably as old as when humans turned agrarians, confident in the seasonality of the sowing and harvesting cycle. Also 17 year stock market cycles have been documented by a number of different people.

Russell Napier, in his book Anatomy of the Bear: Lessons from Wall Street?s four great bottoms refers to a statement from professor Jeremy Siegel?s analyses of total returns since 1802 (albeit without much explanation):

?All an investor needs to do is hold for 17 years and they will never lose money in the stockmarket. If you sit it out and ignore market prices, history suggests that in sometime less than 17 years the bear will simply go away, leaving your real purchasing power undamaged?.

Even Warren Buffett believes in the 17 year cycle, as expressed in a rather long winded way in an article published in Fortune magazine in November 1999.

While Buffett is known for his fundamental value investment approach he rarely speaks about general stock market levels and doesn?t like to forecast where the market may go in the future.

However, Buffett?s consistent ability to grow his funds through many investment cycles can?t be based on him being ?lucky? all the time in growing and preserving his, and his investors?, fortune. An understanding when the major turning points happen and then making the big calls is clearly where Buffett distances himself from most other investors, private as well as institutional.

Forward looking stock market cycles are about forecasting future market activity based on historic performance. It comes as a surprise to many people that booms and busts occur surprisingly regularly, while, according to Kerry Balenthiran, there is a clear repeating 17.6 year cycle in the stock markets.

His ?Balenthiran Cycle? shows the intermediate turning points that match stock market behavior going back to the early 1900s and, in his book, extrapolate the cycle forwards to provide a market roadmap of the next secular bull market to 2035 and subsequent secular bear market to 2053.

Following this low Balenthiran forecasts (using historic cycles) that we are likely to see a bounce in the markets with higher lows in 2015 and 2018 before the new secular bull market begins in 2018.

Imagine if you had sold at the highs of 2000 or 2007 and bought back 2.2 years later rather than waiting 5 years to make your money back?

While his research is based on the Dow Jones Industrial Average (DOW), due to reliable data being available for longer periods than the FTSE100, in recent interviews, Balenthiran confirms that his findings are equally applicable to the UK stock market. In fact, the DOW and the FTSE100 have been in the same sort of phase ever since the bull market high of 2000.

According to Balenthiran the current 17.6 year stock market cycle says that the next secular bull market in stocks will begin in 2018, while the end of 2013 may offer a great (last) opportunity to buy in at share prices we may never see again.

What is important to realise is that while Balenthiran is not trying to determine by how much the stock market may increase or decrease, during a Balenthiran Bear Market Cycle, instead it shows distinct phases of fixed time, turning points and direction.

Using data from the FTSE100 since 2000, I will now make an attempt to show you how the current Balenthiran Bear Market Cycle looks like.

The Balenthiran Bear Market Cycle model has correctly identified 2000 (well almost), 2002, 2007, 2009 and 2011 as pivital points in the current bear market in so far that most of the highs and lows are within 5% to 10% of the actual market tops and bottoms even though the actual turning points may have been slightly early or late in the year.

According to Balenthiran ?there is every reason to think that during 2013 there will be a final significant low for this bear market?.

What will such a market drop cause?

If such a drop occurs, according to Balenthiran the coming low of 2013 will be the last significant market low of this bear market. Although there will be continued volatility after 2013, there should be higher lows after 2013. Therefore the 2013 market low ?represents a good time to start accumulating equities for the next 23 years ? five remaining years of this bear market and 18 years of the new bull market?.

The lows that Balenthiran expect in 2015 and 2018 are likely to be higher lows than the coming one in 2013, and, in his view, ?the best approach is to start stake building in the stock market lows of 2013 and 2015, buying great stocks at low valuations and riding the next great bull market?.

What is interesting is, that the Balenthiran Cycle has fixed start and end dates with predetermined intermediate turning points. The cycle can therefore be rolled forward in perpetuity according to Balenthiran with the next bull market from 2018 to 2035 and the bear market from 2035 to 2053. Fascinating stuff!

Clearly, while one or more subsequent ?black swan? events can happen later this year, we will closely monitor stock market developments. At least we have a roadmap as we know which high quality dividend paying companies we want to own long term, in the Dividend Income Portfolio, and, at what price. We will just have to wait until Mr Market sells them to us.