The Art Of Execution ? The Hunters: Pursuing Losing Shares 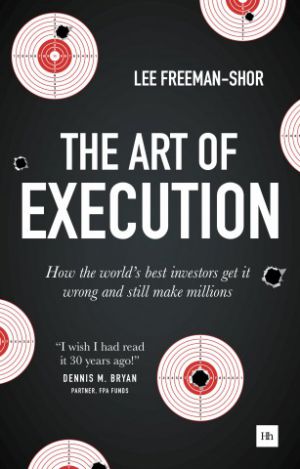 Excerpt from: Lee Freeman-Shor. The Art of Execution: How the world's best investors get it wrong and still make millions (published by Harriman House)

The Art Of Execution - The Hunters: Pursuing Losing Shares by Lee Freeman-Shor

Rather than killing an underperforming investment and forgetting about it, the hunters stalked their prey ? watching it get steadily weaker and lassoing another limb every time it stumbled.

Then they sat back with their prize and waited for it to recover, eventually selling it on for a handsome profit.

In gambling, such behavior ? effectively doubling down ? is known as the Martingale approach. It is frowned upon and rightly so: it often leads to ruin.

But in well-chosen investments, this is a strategy that wins over time ? you acquire more and more assets at cheaper and cheaper prices. When the price of the assets goes up above the average price you have spent, even if it is hardly motoring into new highs, you will be making money.

Let me stress at the outset that the Hunters, like all successful practitioners of what is called ?dollar-cost averaging?, planned beforehand to buy more shares if a price fell. So they did not go all in on day one. Rather, they invested a lesser amount at the outset and kept some cash on the side ? waiting for an opportunity to buy more at a lower price in the future.

The key reason for the Hunters? approach lay in their invariably contrarian style. They were value investors. They generally found themselves buying when everyone else was selling, and this was an extension of that philosophy, another way of exploiting Mr Market when he was acting irrationally.

The approach the Hunters took is a little like the one many of us adopt when it comes to bargains in the January sales ? putting off purchases beforehand because we believe what we?re after will end up getting sold at a significant discount. Unlike in a January sale, you don?t have to queue up outside for hours and fight your way through fellow bargain-hunters: you can slowly acquire more and more of your purchase as its price gets slashed.

Success starts from failure
There is a surprising overlap in early investing experiences among the Hunters. Near the start of a significant number of their careers, the Hunters had the good fortune of having a terrible year.

It was a year in which they lost many of their investors a lot of money ? and soon found themselves losing a lot of their investors. By the end of one early traumatic period, one Hunter I worked with told me he only had a single client left.

The reason this turned out to be fortunate was because of the lessons the Hunters learned. They are what ultimately led to them delivering returns that made both them and their clients very wealthy indeed.

The Hunters realised that being a contrarian investor is dangerous because you are always going against the crowd. As such they became experts on interpreting charts and other methods to truly gauge the crowd?s sentiment. After all, it was no use buying when the crowd showed no signs of changing its mind any time soon.

It burned into their minds the important fact that just because something is cheap does not mean you should buy it.

They also grew unafraid to sell if it became clear they really had made a mistake. Poor value investors I have come across refuse to adapt when they are losing and tend to support their lack of action by saying, ?I got it wrong but the stock is simply too cheap to sell now.?

A bad contrarian investor can make for a very committed Rabbit.

But if a stock still passed the vital ?Would I buy this knowing what I know now?? test, the Hunters followed their plan, and started to put their money on the side to work as the share price dropped.

Snatching victory
Some of the Hunters working for me did not simply buy more of a stock if it fell beyond a certain trigger point, say 20%. Rather, they enjoyed trying to pick the bottom, buying in at the greatest possible discount, something that is very hard (if not impossible) to do.

I saw a number of the Hunters get too many of these calls right to think they were playing a losing game. That said, the rest of us are probably better off doing what the others did and simply buying significantly more shares when a stock price falls between 20% and 33% (the reasons for this were covered in the previous chapter: that was the range in which the data made it clear it was sensible to materially adapt).

The exception is if our conviction in a stock has lessened for a good reason. In that case we should do exactly as the Hunters also did, and sell.

I saw the Hunters double or treble their holdings at the bottom on several occasions and then enjoy the ?rewards as the shares recovered. It was clear that such moments gave the Hunters a real adrenaline kick: apparently there is no better feeling than snatching victory from the jaws of defeat.

Be under no illusions: being a Hunter requires patience and discipline. You have to expect a share price to go against you in the near term and not panic when it does. You have to be prepared to make money from stocks that may never recapture the original price you paid for your first lot of shares. If you know your personality is one which demands instant gratification, this approach is not for you.

?I?m accustomed to hanging around with a stock when the price is going nowhere. Most of the money I make is in the third or fourth year that I?ve owned something.?

Let?s look at some examples of the Hunters in action.

CASE STUDY: Aker Solutions
Aker Solutions is a Norwegian oil services company headquartered in Oslo. It is a global provider of products and services related to the construction, maintenance and operation of oil and gas fields.

One of my Hunters bought this stock on 14 April 2008 at an initial price of ?15.84 per share. Roll on a year and a half and the share price had plummeted. On 28 September 2009 my investor seized the opportunity to exploit Mr Market and bought significantly more stock so as to reduce the average price paid for his overall position to just ?7.61.

On 28 January 2010 he sold his entire stake in the company with the shares trading at ?9.58 after recognising his original thesis was no longer valid. Had he not done anything he would have realised a loss of 40%. However, by having the courage of his convictions to buy significantly more shares when they were depressed, he sold out of the position having made a profit of 24%. The Hunter turned a loser into a winner.

CASE STUDY: Experian
Experian is an Irish company with operations all over the globe, including the USA. The company collects information on individuals and produces credit scores which are used by lenders to decide whether to extend credit to applicants or whether to give them a loan such as a mortgage. If you have ever been turned down for a loan following a credit check, chances are that the report the loan officer used to make his or her decision was generated by Experian.

This paints a picture of a rather bulletproof business model because so many companies rely on Experian?s reports in the day-to-day running of their businesses. What could possibly go wrong?

A Hunter bought the stock on 13 June 2006, at an initial price of £9.02 per share. Despite holding out through the credit crunch, this Hunter subsequently sold his entire stake five years later on 1 September 2011 with the shares trading at £7.06 per share. Had he done nothing, his patience as a buy-and-hold investor would not have been rewarded and he would have realised a loss of 22%. So much for the saying, ?Time is your friend when losing?.

Fortunately, the Hunter had bought more shares in the company when they fell in price during that period. This reduced the average book price of his shares to £5.66 per share and meant that when he did sell he realised a profit of 19% and not a loss of 22%. Whilst 19% does not represent an earth-shattering investment, and you could argue that he should have sold and deployed his capital elsewhere, it is clear that the investor added significant value through his actions. He turned a loser into a winner. This is the type of investor I want on my team.

CASE STUDY: Technip
Technip is a French project-management, engineering and construction firm ? for the oil and gas industry. It is seen as a world leader in what it does ? whether subsea drilling, laying specially built pipelines, producing floating offshore platforms or helping to plan the development of an oil or gas field.

On the face of it, this was a poor investment that lost 6% and tied up capital that could have been better deployed elsewhere. However, this Hunter stuck to his process of buying materially more shares in the company if the share price falls and nothing otherwise has changed. He bought heavily during the two-year period when the shares sold off.

By doing this he managed to reduce his average book price per share to ?42.24. This meant that instead of realising a small loss he actually realised a gain of 22%.

CASE STUDY: Thomson Reuters
Thomson Reuters is a multinational media company based in New York. It is one of a number of leaders at providing the very latest content and data to the finance industry. It produces material to help lawyers and accountants ensure they are meeting their requirements of continued professional education. It also produces research for the pharmaceutical industry. On the face of it, this looks like a solid business with attractive end clients. Surely nothing could go wrong?

Thankfully, because he had bought materially more shares in the first few years of his holding when the share price had fallen, he was able to reduce his average book price to £15.82 per share. This meant that instead of realising a loss of 15%, he made a profit of 17%.

Excerpt from: Lee Freeman-Shor. The Art of Execution: How the world's best investors get it wrong and still make millions (published by Harriman House)