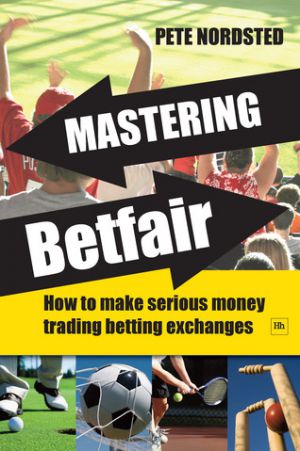 Five Stars - Never Play Without It

While serving in Afghanistan in 2003, Pete Nordsted was introduced to Betfair. Even though the circumstances of his emersion in the world of sports trading seem unusual, after reading Mastering Betfair, it?s clear that Nordsted has a flair for understanding ?the world?s largest betting exchange?. Mastering Betfair not only acts as a guide to successfully ?mastering? the aforementioned betting exchange company, but also serves as an elucidation and elaboration of Nordsted?s strategies and thoughts when it comes to wagering cash on sports.

Avoiding ?confusing jargon? from the outset, Nordsted guides the reader through a brief history of Betfair. Most importantly, he focuses on how traders can, and presumably, do make money out of Betfair?s unique trading platform. As Nordsted observes early on in Mastering Betfair, Betfair differs from traditional bookmakers, such as William Hill or Ladbrokes, in that it

?...does not make prices. Instead they are an exchange, where customers make and take prices themselves. Betfair then makes money by charging commission on trades?
Nordsted?s strategies centre on what?s known as ?greening up?. While this will be a relatively new term to casino players, in the betting world it?s a method favoured by successful traders. Early on in Mastering Betfair, Nordsted specifies how ?greening up? works, using an example of a football match between Fulham and West Ham. In simple terms, Nordsted explains that by ?greening up? you are ?equalising your profit across an event, regardless of the outcome? by placing both lay and back bets, where appropriate. As Nordsted suggests throughout the book though, there is much more to Mastering Betfair than simply having the ability to place both types of bets: Various other factors can cloud or sharpen a trader?s judgement.

Much like casino experts who advise on the core skills of money management and diaries tracking wins and losses, Nordsted suggests that planning, systems and strategies form an integral part of a trader?s success. Anyone who has read practically any gambling book knows that while experts may suggest the aforementioned methods, they are much easier to discuss on paper than actually carry out. However, as Nordsted rightly observes, if you really want to get to grips with betting exchanges such as Betfair, you have to plan ahead. The author elaborates on what could be considered minor details, such as how to configure your Betfair account so it works for you, as well as the necessity of finding your market ?niche?. The overall effect is as follows: To be a success in the markets, you really must plan ahead.

Mastering Betfair is split into six distinct concepts, or parts, but it isn?t until Part Five where Nordsted deals explicitly with strategies. Interestingly, Nordsted?s strategies don?t occupy a large part of the book and, while explaining them he notes that they are malleable and can suit most traders? needs. While the book is marketed as predominately strategy based, the theory sections of the title are bolstered by a rich and diverse discussion of topics such as how to manage trading and your lifestyle, as well as avoiding common pitfalls such as betting on your favourite football team. The aforementioned themes arguably do fall under the large umbrella of ?strategy?, but to review this book as a purely mathematically based title would deny its strong points, which are its honesty, integrity and, at some points, even humour. Early on in Mastering Betfair, Nordsted modestly suggests that he hopes the book will fill a current gap in the sports trading market and we believe Mastering Betfair not only closes this gap, but also shows how other markets are lacking the expertise and interest which Nordsted expresses throughout the title for his subject.